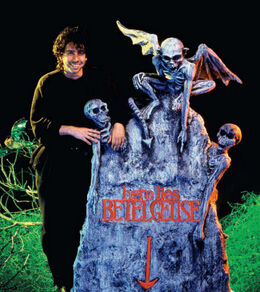 He also worked on "Pee-Wee's Big Adventure", "Edward Scissorhands", "The Nightmare Before Christmas", "James and The Giant Peach", "Big Fish", "Charlie and the Chocolate Factory", "Corpse Bride", "Frankenweenie", and "Dumbo".

Burton during the filmming of the Beetlejuice Film.

Add a photo to this gallery

Retrieved from "https://beetlejuice.fandom.com/wiki/Tim_Burton?oldid=14656"
Community content is available under CC-BY-SA unless otherwise noted.